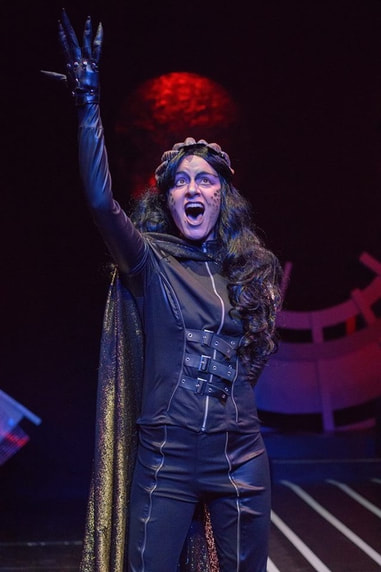 Rinaldo © Max Wendt
As Queen of the Night in Die Zauberflöte with Madison Opera:

“Likewise, Caitlin Cisler played the Queen of the Night…and her vocal fireworks were spectacular, plus she was a delight to watch in her bizarre winged costume.”
-Jacob Stockinger, The Well Tempered Ear 25 April 2017

“Mozart was more demanding of the opera’s virtuosi roles, particularly the winged Queen of the Night (soprano Caitlin Cisler), the mother of Pamina. She was called on more than once to hit high F notes, unusual in any opera, and did so flawlessly.”
-Michael Muckian, Wisconsin Gazette 24 April 2017

“Local soprano Caitlin Cisler…was dazzingly powerful in her second aria as the Queen of the Night.”
-John W. Barker, The Isthmus 27 April 2017
​
As Armida in Rinaldo with Fresco Opera Theatre:

"...on the villainous side is Caitlin Cisler as the sensational Armida. Her remarkable soprano accompanied by her movements fit the dastardly persona to a tee. Cisler's electricity radiated through the space while she played each moment to its fullest."
-Amanda Finn, Broadway World 08 June 2015

"The standout is soprano Caitlin Cisler as Armida, the evil queen. Immensely powerful, she owns the stage every time she appears."
-Jay Rath, The Isthmus 06 June 2015

As Pamina in Die Zauberflöte with Dayton Opera:


"...Caitlin Cisler's return was another triumph. As Pamina, she sang the great arias marvelously and was lovable to everyone in the sold-out hall."
-Burt Saidel, Oakwood Register 26 November 2014
As Marie in La fille du régiment with Madison Opera:

"What's really important is that Caitlin Cisler, who plays the opera's title character, Marie, should be invited back to star in every future Madison Opera production. Cisler combines the cute-as-bug personality necessary to the role of Marie with a breathtaking range of voice."
"But, honestly, every time someone else was singing, I was waiting for Cisler to reopen her mouth."
-William R. Wineke, Madison Magazine 09 February 2014

The Daughter of the Regiment © James Gill Photography
"But it was Cisler as Marie who floated and flitted and sparkled and sang, easily combining winsome appeal with coloratura chops. Her voice is clear and assured, and the work gives her many moments for showiness and more subtle expression."
-Greg Hettmansberger, Madison Magazine 08 February 2014

"Pert young Caitlin Cisler, who not so many years ago was a graduate student singing in UW Opera productions, has matured into an extraordinary artist. Her bright, clear high soprano perfectly fits Marie's character, while her acute stage instincts make her an adroit comedienne."
-John W. Barker, The Daily Page 08 February 2014

"The production marches merrily along, buoyed by brilliant singing from Appleton-native and UW-educated Caitlin Cisler...in the title role as Marie. Cisler’s sparkling sound and agile coloratura make her ideal for the part...Her girlish demeanor in the first act is both charming and entirely suited to the character."
-Jacob Stockinger, The Well Tempered Ear 09 February 2014

Opera in the Park 2013 with Madison Opera:

"Cisler was more dazzling than ever in the showpiece "Glitter and be gay"."
-John W. Barker, The Daily Page 15 July 2013

A New Year's Eve Celebration 2012 with the Dayton Philharmonic:

“Caitlin Cisler sent her mellifluous coloratura soprano voice to the corners of the hall. Warm yet brilliant...she delivered the complex variations to the enthralled audience."         -Burt Saidel, Oakwood Register 03 January 2013

The Student Prince
As Oscar in Un ballo in maschera with Madison Opera:

“Caitlin Cisler does an absolutely delightful turn as Oscar the page, her vibrant soprano providing color and character, including a particularly effective vocal staccato during the masked ball’s largely legato passages. ...Cisler dances to her own melodies in effective contrast that may too often go unnoticed by an audience focused on the principles. Kudos to both the performer and director for conspiring to add such an effective layer of character to the production."
-Mike and Jean Muckian, Brava Magazine 29 October 2012

"One special treat of this production is Caitlin Cisler, who sings the relatively minor role of Oscar, the king’s page.  She has a wonderful, bell-like voice and adds joy to the stage just by being on it."
-William R. Wineke, Madison Magazine 29 October 2012

"A cherished product of the UW, Caitlin Cisler, provided a perfect foil as the page Oscar, one of Verdi's few high-coloratura soprano roles. Her beautifully piping voice was exceeded only by her delightfully spirited acting -- a performance to be cherished."
-John W. Barker, The Daily Page 27 October 2012

As Morgana in Alcina with UW Opera:

"As Morgana, Cisler is often more interesting than the title character. She changes affections boldly, ornaments with bright soubrette touches and sings part of one lusty aria, "Tornami a vagheggiar," astride a cowering Bradamante."
-Lindsay Christians, The Wisconsin State Journal 18 April 2009

The Daughter of the Regiment © James Gill Photography
As Cunegonde in Candide with Four Seasons Theatre:

"....after I heard soprano Caitlin Cisler sing the fantastic, fabulously difficult "Glitter and Be Gay," I understood completely. She wasn't even halfway finished with the song, and I wanted to cheer. When she finally collapsed on her chair, bedecked with pearls, rings and a tiara, I wanted her to sing it again."
-Lindsay Christians, Capital Times 09 February 2009

As Norina in Don Pasquale with UW Opera:

"Caitlin Cisler as Norina also exuded star quality with a presence
and voice that commanded attention and dominated the stage
whenever she was present."
-Stephen Christiansen, The Badger Herald 29 February 2008

As Mélisande in Péllèas et Mélisande with UW Opera:

"...Cisler has a strong and thrilling voice; her performance
transcends the text.”
-Jay Rath, The Wisconsin State Journal 30 October 2007